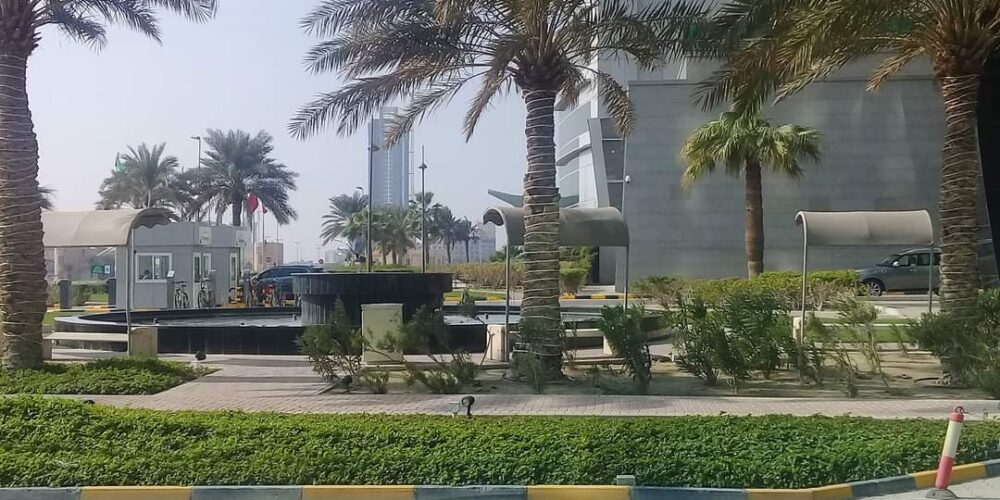 We specialise in the art of landscape and garden design and horticulture, inspired by our philosophy, “to please the eye, gladden the heart and nourish the soul”
Our services include contract preparation, tender action, appraising tender submissions, including tender reporting, and advising the Client on the appointment of a contractor. Our services also include operations onsite; these include visiting the site periodically and at critical times in the contractor’s programme to observe that work is being carried out in accordance with the drawings and specifications, checking and certifying accounts submitted by the contractor, and generally administering the project. Our further services cover providing horticultural advice in connection with garden and landscape maintenance.

Operating in the Arabian Gulf since 1982, the practice was registered in Bahrain in 1994, though its origin can be traced to the early 1800s and the Royal Exotic Nursery, Chelsea, London, through which its owners and successors contributed much to the horticultural excellence of Britain. John Arthur DaviesSPCcontinues that tradition of excellence inspired by the spirit of the Kingdom of Bahrain.

Our location, the Kingdom of Bahrain, is an archipelago of thirty-three islands situated in the Gulf of Bahrain roughly at the halfway point of the Arabian Gulf, between the Kingdom of Saudi Arabia and the State of Qatar. Bahrain, the largest island and which gives the country its name, means two seas; this being a reference to the saltwater of the Gulf and the sweet water aquifers under the sea bed and which pass beneath the island. Theaquifers  emerge through fissures in the sea bed and rise as columns to break on the surface. Not so long ago, off the coast of Muharraq, it was possible to dip a bucket into the sea and lift it out filled with fresh water. Until fairly recently aquifers broke on the surface of Bahrain as fresh water springs (ains), which in turn irrigated the date palm plantations, a critical food resource they had provided for thousands of years…

In early Islamic times, the name Bahrain applied to the entire length of the Arabian coastline, extending from Kuwait in the north to Oman in the South. Thousands of years earlier it was known as Dilmun, the Garden of Eden of Sumer (present-day Iraq), and it is said to be the place where Gilgamesh sought immortality. There is archaeological speculation revealed by David Rohl, that Sumerians after settling in Dilmun eventually departed on a voyage of exploration, arriving in the Red Sea and landing on the western shore, they carried their boats overland to the Nile, where they conquered the indigenous inhabitants and founded the first dynasty of the ancient Egypt civilization. Also, there are indications to suggest that Bahrain is the island referred to by the ancient Egyptians as the “Resplendent Isle” or “Island of the Blessed” to which the Pharaoh journeyed on his passage through the under-world, culminating in his rebirth. 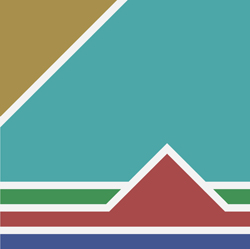 Our logo reflects the elements associated with the art of landscape and garden design. The pyramid reflects the hard elements found in nature and symbolizes hard landscaping; the green band indicates vegetation, i.e. soft landscaping; the dark blue represents water; the light blue the sky, denoting space – the medium through which  ideas become manifest; and the golden triangle the sun – the giver of life, and which also represents the light illuminating the creative process. The angle of the pyramid and that of the sun correspond to each other signifying the earth’s relationship with the heavens and points to the origin of the Garden.  This idea was inspired by astro-archaeological research which indicates a direct correlation between the pyramids of Egypt and the constellation of Orion, suggesting that the ancient Egyptians were attempting to reflect heaven on earth – an aim entirely in keeping with our own design philosophy expressed in the above illustration. 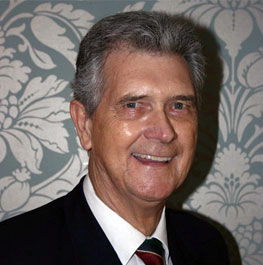 Our principal, John A. Davies, began his career in 1959 when he joined The City of Manchester Corporation Parks Department as a nursery boy. At the age of sixteen he was deemed worthy of being made an apprentice and there followed five years of training in amenity horticulture, which embraced nursery practice, landscape and garden design, including implementation, as well as landscape and garden maintenance. He has undertaken prestigious projects in several parts of the world embracing, tropical and subtropical climates, and is noted for out-of-the-ordinary concepts. He has been described as “a product of the traditional school of English landscape design;” “a builder of the earthly paradise” and “a planter of poems.”

His philosophy aims to please the eye, gladden the heart and nourish the soul, a philosophy inspired by a pavement garden in Chelsea, London – see image below, created by the late Mrs. Doris Henty (Christian Science practitioner), for the benefit of the community. It was his duty to maintain the garden by planting flowers according to the seasons. Passers-by invariably commented to the effect that the scene “lifted their spirits and touched their hearts.”

John A. Davies is a regular contributor to magazines, which have included Gulf Construction, Arabian Homes, and Bahrain Confidential, as well as the Garden Journal and the Gulf Daily News. He currently contributes to Landscape Middle East Magazine and writes articles in support of fellow landscape professional, Jean – Claude Melone’s call to save mankind through planting trees, while writing in support of others, similarly committed, all such writings being posted on Facebook.

History of the Practice

The practice traces its history to the early 1800s and the Exotic Nursery in the Kings Road, Chelsea, London, UK, its owners and successors contributing much to the enhancement of Britain’s reputation as a centre of horticultural excellence. The Exotic Nursery had been founded by Joseph Knight, who had started his professional career as a gardener to the Duke of Bedford. Knight became one of the leading luminaries of the day, involved in botanical expeditions and importing plants from all over the world, while serving clients who included King William IV and Queen Adelaide, and the nobility, whose gardens inspired the creation of public parks…

After Knight’s death in 1855 the nursery was sold to the equally renowned horticulturist, James Veitch, whose son, Harry Veitch was largely instrumental in founding the Royal Horticultural Society’s Chelsea Flower Show, which remains the most renowned show of its kind in the world.

Following the demise of the Royal Exotic Nursery in 1914 for residential development, the horticultural presence in the Kings Road was carried on by Chelsea Nurseries founded by Alfred Dawkins, who for many years had been manager of Veitch’s Seed Department and whose successors continued the tradition of excellence set by Joseph Knight and the Veitch family.

In the late 1960s and 1970s when our principal was a partner in Chelsea Nurseries, the firm continued the tradition of excellence established by Joseph Knight and his successors, undertaking the laying out and planting of gardens in the London area and surrounding counties. Changing economic circumstances in the late 1970s led to relinquishing the nursery aspect .and continuing with design and build projects as John Davies Associates, later becoming exclusively design orientated and taking overseas commissions, which included West Africa, North Africa and the Arabian Gulf.

Towards the close of 1989 a landscape consultancy was secured with the Parks Department of the Central Municipal Council of Bahrain in connection with the design of public parks and gardens. This was followed by a design commission for the Royal Saudi Embassy in Bahrain and design assignments for members of Bahrain’s business community.

In 1993 a consultancy appointment was secured with the Special Projects Department of the Ministry of Housing. The project was highly prestigious, though confidential, and related to the landscape development of one the islands which make up the Bahrain archipelago.

Based in the Kingdom of Bahrain, the firm’s expertise finds expression in the Arabian Gulf and other parts of the world such as the Seychelles and continues the tradition of excellence inspired by Joseph Knight and the Veitch family.

In 1994 in response to a government invitation to foreign investors, the practice was registered as a sole proprietorship, operating as John A. Davies Landscape Consultants. This followed service to the Central Municipal Council, and the successful completion of the assignment for the Special Projects Department at the Ministry of Housing in connection with the highly prestigious island project referenced above – see reference under Acknowledgements.

We are a multi-national, multi-talented, and dynamic team, with skills, as already mentioned, covering landscape and garden design, horticulture, and irrigation design, supported by photorealistic imaging. . Skills combining to, provide a comprehensive service ranging from conceptual design, through the production of working drawings, through tender action, contract preparation, and operations on site, the latter involving supervision, management, and administration…

The design – in effect, a landscape in miniature in effect, was developed with a typical London backyard in mind, and viewed from a living-room or study. It was partly inspired by a garden we had created on a Japanese theme for a Japanese American businessman, whose wife informed us that the scene viewed from his study had imbued him with a peace that had enabled him to make wise business decisions in critical situations.

Certainly peace was the main factor, along with joy. Another influencing factor was the 1937 movie Lost Horizon, which features a stunningly beautiful place called Shangri- La or Valley of the Blue Moon, a place of peace and tranquility, permanent happiness and immortality.

That visitors enjoyed peace and joy (and perhaps a glimpse of immortality!) on viewing the garden was borne out by the many who struggled to see it, see image below, and those who sought us out offering their thanks and appreciation.

Gardeners’ News described it as “a garden to draw the lines from every furrowed brow and leave you at peace with the world and sinking into its beauty.” Garden on a Japanese Theme Visitors jostled one another to get a view of the garden and once having reached the front of the viewing stand, were reluctant to leave, such was the appeal of the scene. Representatives of the Winning Team Members

In February 2014 our services to the landscape development of Bahrain were acknowledged by HRH Prince Khalifa Bin Sulman Al Khalifa, (late Prime Minister of Bahrain), during an audience with him at Gudaibiya Palace. In 2019 John A. Davies received a Lifetime Achievement Award for services to the Landscape Industry in Bahrain and the Middle East. John A. Davies being presented with the Lifetime Achievement Award by Nawaf Al Khudhairy, Director, Strategy and Growth, AECOM.