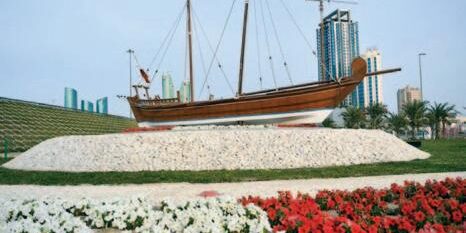 Some months ago, having occasion after a long absence to pass through the Al Farooq Interchange it was very pleasing to see landscape improvements taking place.

Discussing the project with Engineer Shaikh Mohammed Al Khalifa, Undersecretary for Municipalities Affairs, I tabled questions and commented as follows:

The landscaping recently implemented at the Al Farooq Interchange is appealing, could you please elaborate?

The landscaping of the Al Farook Interchange, which covers 92,000 square metres, represents a green lung in the heart of Manama, the capital city of Bahrain, and is part of a programme reflecting the Ministry of Works, Municipalities Affairs and Urban Planning’s commitment to beautification. This focusing on the enhanced greening of streets, open spaces and highway interchanges, as well as public gardens throughout the Kingdom of Bahrain. The project commenced on the 25th September, 2019 and was completed on the 31st January 2021.

Your reference to the interchange being a green lung implies a commitment to the environment, in addition to beautification.

The interchange features a number of dhows, could you please explain their presence?

That’s correct, the selection of trees, shrubs and other plants having been undertaken in close coordination with the Supreme Council for the Environment; for, in addition to the natural beauty offered by trees and other plants, the Bahrain government is mindful of the critical role the plant kingdom plays in mitigating global warming through the carbon – oxygen exchange and maintaining biodiversity. Moreover, considering the density of traffic flowing through the interchange, plants, particularly trees, serve as vacuum cleaners filtering pollutants from exhaust emissions.

The dhows are a reference to the location of the interchange near the old port of Manama; they also refer to cultural elements such as Bahrain’s fishing and pearling diving industries; likewise there are fountains in keeping with this principle. Consequently, the Ministry considers the Al Farooq Interchange a strategic project, against which a budget of BD900,000 was allocated for its landscape development.

The junction on the south side of the interchange near the Central Market consists of a paved area featuring Islamic patterns, the fountains you mentioned being significant elements all providing an interesting contrast to the surrounding soft landscaping.

It was deemed important to celebrate the junction. Fountains in conjunction with all the other aspects provided the answer. Also, it was felt necessary from a cultural point of view to introduce a reference to Islam. With water and geometric patterns being fundamental to a traditional Islamic garden and the landscaping of the interchange, though evocative of parkland, represents a type of garden, this approach seemed entirely appropriate.

Junction on the south side of the interchange

The interchange, with its broad expanses of mown grass punctuated with trees, certainly has a parkland feel about it, thus providing the city of Manama with a unique feature. Was this part of the design intent?

Absolutely, for the objective was to develop a unique landscape feature in the heart of Manama with the emphasis on soft elements such as evergreen trees against a green foil, while incorporating cultural icons such as dhows highlighting Bahrain’s strong links to both fishing and pearl diving, as already mentioned – all embodied in the national flag flying in the centre of the Islamic garden element previously discussed. The interchange is part of a strategy to develop open spaces as green areas by planting appropriate ornamental trees and shrubs set in carpets of grass lawn, complemented with suitable landscape lighting.

Yes, that is correct, the TSE being provided by the Tubli Sewage Treatment Plant. The irrigation system is entirely automatic employing the latest electronic controls, providing pop-up low angle precipitation for grass areas, drip irrigation for trees, shrubs and seasonal flowers, with several 400 cubic metre underground storage tanks along with pumping systems having been installed for the purpose. From an environmental point of view, irrigation water not taken up by the plants and which has not evaporated or retained by the soil, will filter through the ground strata to recharge the sweet water aquifer,

Quite a range of ornamental trees and shrubs have been planted, could you please provide some background information about their selection? Could you please recount some of the plants chosen for the project?

The selection procedure involved choosing plants most suitable for Bahrain’s climate. The exercise involved choosing almost 800 trees as well as 1,500 shrubs, all reflecting a wide range of different types. Seashore paspalum was chosen as the grass owing to its tendency not to “brown out” so much as Bermuda grass during the cooler months of the year, thereby largely avoiding the need to over-seed with perennial rye grass.

Trees planted alongside one of the exit roads Examples include the date palm, which of course is native to Bahrain, while ornamental trees include the yellow poinciana (Peltophorum inerme) and, the royal poinciana (Delonix regia), with shrubs including bougainvillea (Bougaivillea glabra) and the peacock flower (Caesalpinia pulcherrima), as well as herbaceous and groundcover plants plus succulents and seasonal flowers, all of which having adapted very well to the kingdom’s climate.

By way of further interest, many of the trees which are now viewed as native, such as the council tree (Ficus altissima), also included in the planting palette of the Al Farooq Interchange, as well as the banyan tree (Ficus benghalensis), were brought over from India during the reign of HH Shaikh Hamad Bin Isa Al Khalifa (1872 – 1942), who incidentally established the first public park in Bahrain.

Looking back over the several decades I’ve been living and working in Bahrain and the Arabian Gulf generally, it has been my experience that royal families have played a major role in the greening of cities in the region; and bearing in mind HH Shaikh Hamad Bin Isa’s contribution all those years ago,, it could be said that the Kingdom of Bahrain was the first country in the region to pioneer environmental improvement.

That would be an accurate assessment – witness the Water Garden initiated by HRH Princess Sabeeka; and the Prime Minister HRH Crown Prince Salman Bin Hammad’s directive regarding planting of street trees, thereby continuing the work of his late predecessor HRH Prince Khalifa Bin Salman Al Khalifa, who in turn had continued the tradition established by his forefathers

On a concluding note, it is inspiring that the Kingdom is so committed to improving the environment and by extension the lives of the population, simply by planting trees.

The Ministry of Works, Municipalities Affairs and Urban Planning in cooperation with the Supreme Council for the Environment continues the tradition of environmental improvement. In addition to tree planting, this involves implementing a number of strategies related to agriculture and beautification works dedicated to increasing the green areas in the Kingdom, all of which aim to promote sustainable urban development, while enhancing the quality and efficiency of the services provided to citizens and residents.

It has been an interesting talk, thank you for your time.

Refurbishment of the Water Garden – Oasis in the City
February 20, 2021